With Ren back on the team, everyone heads back to Neathia, but discover that Ren has been left behind! Elright explains that, as a last resort, the third shield is programmed to expel anyone with Gundalian DNA. Dan asks if they can just shut the shield off to let Ren in, but Fabia refuses and leaves. Serena explains the origins of her hatred to the Gundalians: Aranaut was originally partnered with Commander Jin, but they were defeated by Kazarina. Jin was unfortunately lost in battle and Aranaut was taken captive and experimented on. Fabia single handedly infiltrated the Gundalian palace and rescued Aranaut. Serena then reveals that Jin was Fabia's fiance and that Aranaut has no memories prior to his rescue due to the experiments. While Marucho searches for Ren, Dan asks Fabia to give Ren a chance. So, everyone heads to to find Ren and Marucho as Fabia challenges Ren to a battle. The stakes: if Ren wins, he can stay, but if he loses, he must leave Neathia forever. Ren puts in Linehalt and Rubanoid but they both fall to Aranaut. Knowing the conditions of his defeat, Ren begins crying. However, Fabia is convinced that he has changed and welcomes him to the brawlers. Ren is made a Castle Knight by Queen Serena and swears loyalty to her and the brawlers. 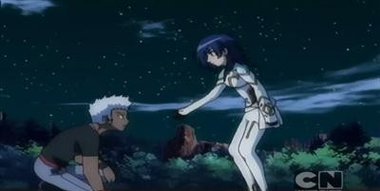