Jake has been captured by Kazarina and is tortured by her. Meanwhile, Dan eagerly wants to rescue him, feeling that their argument was his fault but everyone tries to talk him out of it. Just then Jake suddenly walks right back into Neathia, claiming to have escaped, however, Shun is not easily convinced of this. When Jake wakes up from his rest, Shun tests his theory by asking Jake if he remembers fighting to restart the second shield, however Jake remembers that he and Marucho were on decoy duty. Dan beings suspecting that something must be wrong with Jake when he begins suggesting making changes to the third shield. Later that night, Jake heads to tamper with the shield controller and get teleported to Dan, who had set the trap with Captain Elright earlier. Jake finally reveals he and Coredem have been brainwashed by Kazarina and a battle ensues. The battle proves to be too much for Dan to handle due to the new and powerful ability card Kazarina had entrusted Jake with. Just then, Shun steps in and they take out Coredem, however Jake does not return to normal and is taken back by Kazarina. Dan vows to rescue his friend. 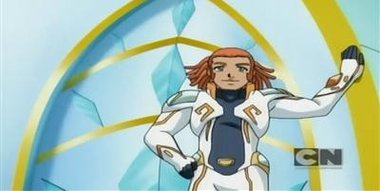