The Secret of the Orb

With the second shield functioning at an even more powerful rate than before, things are looking good for Neathia. Meanwhile, Nurzak and Kazarina are sent to do recon. Nurzak tells Sabator how Barodius' father, the previous Emperor, did not seek to attain the Sacred Orb, fearing that its power is too great, while Barodius is far too ambitious and down right stupid for engaging in such a quest. Mason, however, has plans of his own and escapes the ship, possibly to switch sides. Kazarina becomes infuriated because of what may happen to her, but Nurzak assures her that he and Ren will find Mason. While on their search, they run into Fabia and Marucho, who still feels bitter about Ren's betrayal. Marucho's emotions only become worse when Ren says that their entire friendship was just a ploy and that Marucho shouldn't let something so stupid affect him so. The battle becomes so intense that the Sacred Orb shoots out dimensional rays, that should one get caught in, they will be sent around the dimensions without any way back. Nurzak and Ren retreat while Aranaut and Akwimos attempt to shield Fabia and Marucho from the dimensional rays. Just before it hits them, the Sacred Orb stops but not before Mason and Avior fall victim to it. Back at the palace, Serena expresses how happy she is that Fabia and Marucho made it back all right, while everyone questions why the Sacred Orb acted so. Meanwhile, Marucho believes that Ren will return to their side. However, things don't look to good for Kazarina as she finally gets the punishment she deserves from Barodius, though she is kept alive. While in the hallway, she encounters Nurzak who tells her that he is leaving the Emperor and with Gill as the Emperor's right hand, she needs to find a place for herself quickly. He encourages her to join him, to which she agrees.

Next episode
S03E20 - Partners Till the End 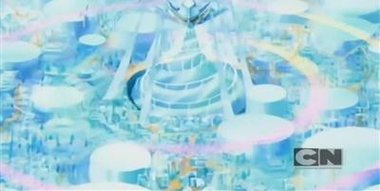