While the Brawlers are on their way to Gundalia, Ren tells the others that he wishes to save the rest of his team from Kazarina's lab, to which the other Brawlers agree. Ren, Fabia, Mason, and Nurzak split off from the rest of the team to rescue them. Dan, Marucho and Shun make their way inside the palace to find Jake. Meanwhile, Barodiusorders Gill and Airzel to separate Dan from the others so that he may defeat Dan and take Dragonoid Colossus. Dan is separated from Shun and Marucho who battle Airzel and Gill. Shun manages to take out Airzel, but he and Marucho fall to Gill. Before Gill and Airzel can do anything else, Shun throws a smoke ball and the two of them escape. Meanwhile, Dan is still lost within the Gundalian castle when a door opens up to a strange room and he is confronted by Barodius. 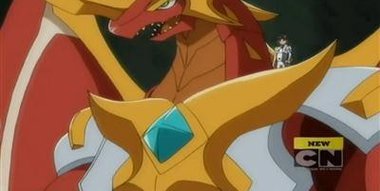