Dan is still upset about losing Jake and wants to rescue him, but Queen Serena forbids it, as it is too dangerous. Frustrated, Dan recalls the day he first met Jake. Linus arrives to bring them all lunch, when Dan and Drago are suddenly pulled away by Dragnoid Colossus to a place between dimensions. There he meets Nurzak and Mason. Dragonoid Colossus explains that if Dan wants to leave, he must defeat him in battle and a battle ensues, Dragonoid Colossus easily gaining the upper hand. As the battle goes on, Nurzak explains that the Sacred Orb is the origin of all Bakugan and that Dragnoid Colossus has been tasked with protecting it. Only two are able to defeat him, the dragon of fire and of darkness: Dragonoid and Dharaknoid and if Drago loses, they will just be giving Dharak the chance to take the Sacred Orb. Dan and Drago manage to pull through and defeat Dragnoid Colossus. Dragonoid Colossus takes Dan and Drago and tells them the rest of the story of the Sacred Orb: the first two bakugan born from the Sacred Orb were Dragonoid and Dharaknoid and every bakugan was born from their DNA sequence. Drago accepts his responsibility and evolves into Blitz Drago. They return to Neathia, bringing along Nurzak and Mason, who decide to fight against Gundalia, although Fabia warns that she will be watching them. Riding Dragonoid Colossus, they head to Gundalia to rescue Jake. 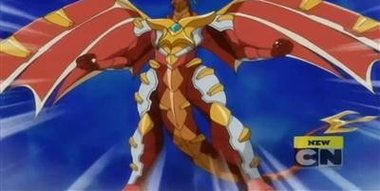