After his battle with Dan and Sid giving him Rubanoid, Ren is very confused as to what he should do. The invasion continues on as the brawlers continue to push back the Gundalians. Kazarina finishes her experiments on Dharak's Exokor while Ren visits Barodius. Ren asks why he has been spared while the others have been punished and assumes it has to do with Linehalt's "forbidden powers." Barodius promises Ren he will have everything he wants so long as he completes his missions. Kazarina informs the emperor of Exokor's completion and the 12 Orders clear a path to the second shield for him. The others hold off the rest of the 12 Orders but have trouble dealing with them. Meanwhile, Drago and Dan hammer on Colossus Dharak, but he proves to be far too powerful. Once again, Dan reaches out to Ren to get him to switch sides before continuing battling Barodius. Drago quickly falls to Dharak's immense power and the second shield is punctured. Barodius orders Ren to prove his loyalty by finishing off Dan and Drago. Linehalt asks if Ren is sure to which he replies he has no other choice. Dan tells Ren just to get it over with when Ren suddenly fires at Dharak and declares he is doing something he should have done a long time ago: fighting alongside his real friends. 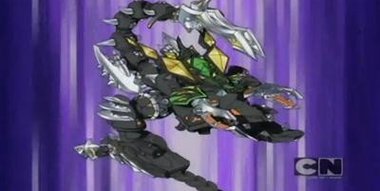