Soon after Ren joined the Castle Knights, the Gundalians begin attacking the third shield. When they find that the third shield contains a DNA barrier, they retreat back to Gundalia for a new strategy. Meanwhile, the Neathians send out patrols to watch out for any Gundalians attacking while a geometric storm (something that disrupts their radars) is taking place, with the Brawlers divided into groups of two to help the patrols. Dan and Jake are in one group, and they soon find an Earth boy named Robin who claims to have escaped the Gundalians' clutches and wants to find his sister. Jake wants to help him, but Dan tries to hold him back, as it is too dangerous, fearing that it may be a trick by the Gundalians. Jake then decides to look for Robin himself, but it turns out to be a trap, as Robin was brainwashed by the Gundalians all along. Kazarina appears and challenges Jake to a battle. Jake doesn't back down and is determined to free the brainwashed children from the Gundalians. Meanwhile, Dan reports back what had happened and the others scolded him for letting Jake go out on his own, so they all go out to look for him. Kazarina lays it hard on Jake and proves to be to much for the inexperienced brawler to handle. Jake scolds Kazarina for using other people to do her dirty work, to which she replies all the children are safe back on Earth, having outgrown their usefulness as strong battlers and she now uses them to bring in stronger subjects...like Jake. The rest of the Brawlers arrive just as Jake is defeated. He apologizes for not having listened to Dan and is taken by Kazarina. 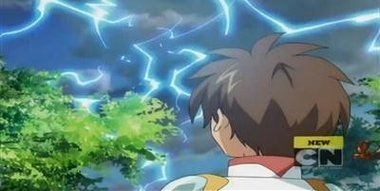