Ren and Fabia reunite with Shun and Marucho and regroup with Mason at Nurzak's secret lair. Meanwhile, Kazarina's experiments have succeeded and she is ready to splice Drago's DNA with Dharak's. This results in Dharak evolving into Phantom Dharak as well as his DNA no longer containing Gundalian DNA, allowing him to pass the third shield. In return, Barodius names Kazarina his second in command, demoting Gill in the process. Mason decides to go look for Nurzak, as there is a chance he survived while the others break into the castle to find Dan. As the Brawlers break into the Gundalian's lair, they run into all kinds of trouble. Ren has to stay back to face Gill, Marucho fights Airzel and Shun deals with Stoica. Kazarina prepares to finish Dan off and Jake is there to watch her, while Fabia is the only one left who will be able to find Dan in time. But Jake seems to be regaining control as he does not destroy Dan when given the chance to. Will he save Dan and snap out of his trance? 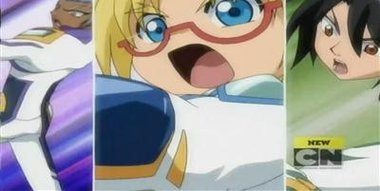