Dan and Barodius immediately battle with Drago easily tearing through Dharak's Exokor. However, Dragonoid Colossus informs Dan that Drago and Dharak are too evenly matched and that Drago must win at all costs. Despite another evolution, it seems as though Drago barely matches up to Dharak in terms of power. Meanwhile, Nurzak suggests they split up again, himself with Fabia and Ren with Mason, in hopes of surprising Kazarina, having already lost the element of surprise earlier. Dragonoid Colossus explains that despite changing in appearance and gaining new powers, Drago has yet to reach his true evolution. Drago begins to worry that he is not worthy of protecting the Sacred Orb, but Dan assures him that they have defeated evil many times before because they believed in themselves. With Drago's confidence restored, a brand new ability is unlocked, which Drago uses to win the battle. Dan demands to have Jake returned and Barodius complies, but Jake is still under the influence of Gundalian hypnosis and attacks Dan, knocking him out in the process. Meanwhile, Nurzak and Fabia get close to Kazarina's lab where she and Stoica confront them. 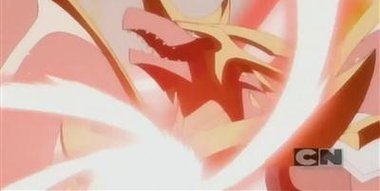