Nurzak, Mason and Fabia attempt to return to Neathia on Nurzak's ship but they are stopped by Gill, though they do manage to escape and arrive just in time to help the brawlers. Lena, Zenet and Jesse are surprised to see Nurzak and Maron alive, but are nonetheless happy. Gill arrives on the scene and tries to convince Barodius that Fabia killed Kazarina, however, Barodius knows it was Gill who killed her and shoots down his ship, along with Airzel who tried to save him. Barodius leaves to confront Queen Serena so Dragonoid Colossus takes Dan to the Palace to protect the Orb while the others hold off Dharak. In an show of outstanding power, Dharak shoots down Dragonoid Colossus (along with Stoica), who drops Dan at the Palace, and returns to lay waste to the rest of the brawlers, leaving him and Drago the last ones standing. Barodius confronts Serena, who refuses to back down. Barodius prepares to attack her, but Dan arrives in time to stop him. However, the Sacred Orb teleports them to an unknown area and reveals itself to be called "Code Eve." 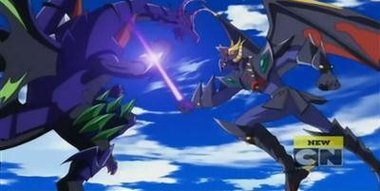