While the brawlers help the Neathians rebuild, Jake has an argument with Dan, saying that they should keep pressing the attack on the Gundalians now that they have the advantage. When Dan and Marucho argue that they should help rebuild, Jake runs off into the forest, followed by Fabia. Meanwhile, Jesse fears that he will eventually suffer the same fate as Sid and Lena and escapes from his prison to Neathia. He is eventually approached by Ren, who has been sent to collect him. They eventually run into Jake and Fabia and a battle ensues, Jesse promising that he will return with Ren no matter how the battle concludes. Jake and Fabia defeat the Gundalians and Jesse willingly returns to Gundalia with Ren, having had one final battle. Kazarina and Stoica prepare to punish Jesse for his escape and lose to the brawlers while Ren attempts to spare Jesse by saying he was much a part of the battle as Jesse was. Kazarina, however, tells him that he can share that information with Barodius himself. Plitheon suddenly speaks out and begs to be separated from Jesse, declaring that he can't stand him, something that surprises Jesse. However, Lumagrowl and Lytherius attack Plitheon for turning on his master. Jesse forgives Plitheon, saying that co-stars often have friction between them, but Plitheon insists he means what he said, as he slowly fades away. Jesse remarks that the spotlight is on Ren now and is presumed killed, leaving behind the book he always carries. While Kazarina and Stoica are walking through the hall, Nurzak appears and tells them that although they can trick the others of their true intentions, he can see them for what they really are. 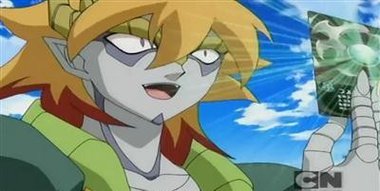