Ren decideds he has had enough of Barodius' false promises and turns on him to fight by his true friends. Dharak however, chooses to let Exokor, Riptor, and Smashtor do the fighting, but eventually joins in a one on one battle against Linehalt. Meanwhile, one by one, the brawlers are taken out by the Twelve Orders (Although Shun managed to take out Kazarina before falling to Airzel). Ren takes a bad beating, so Dan decides to step in, but Linehalt and Ren ask him to stay out of the fight. Meanwhile, Queen Serena prays to the Sacred Orb to protect the brawlers from harm. Barodius begins taunting Ren, and Linehalt begins exhibiting his Forbidden Powers, to the points where they begin to tear Neathia apart. The Sacred Orb, in response to Linehalt's power, sends out its last defense: Dragonoid Colossus. Dragonoid Colossus arrives in time and subdues Linehalt before entering Dan's BakuMeter. Ren realizes that he must live in seclusion to avoid Linehalt's power from causing harm and begins to leave, but is stopped by the brawlers. They welcome him back into their group insisting that Linehalt's power could do a lot of good as it could harm, Ren, feeling happy to be accepted back to the group, transforms into his human form. Fabia, however, is not so sure about their new teammate. 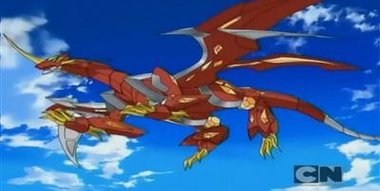