Dan and the others devise a plan to regain Neo while Linus desperately struggles to rescue his friend. Far too injured from the previous episode, Dan urges Linus to rest and leave rescuing Neo to him. With the Gundalian's search for the Element comes up with nothing, Ren is given orders to bring Neo to Gundalia on suspicion that he holds the Element. Before Ren can carry out these orders, Sid barges in and takes Neo, deciding to get a little glory himself and challenges Dan. When Sid finally throws in Neo, Neo gives Drago the Element, causing him to evolve into Lumino Dragonoid. However, Neo's body disappears in the process. With Drago evolving once again, Dan easily takes a win. Meanwhile, Neo appears to Linus in his dream to bid his friend a final farewell, his mission now complete. Julie comes into the room to find Linus crying over the loss of his best friend. Ren and Sid are berated for having lost the Element so soon after getting it. Sid's Rubanoid is taken by Kazarina for experiments while Sid is disposed of. Ren pleads for another chance, which the Emperor grants but implores Ren not to "test" him anymore, this was Ren's final chance to prove himself to the Emperor. 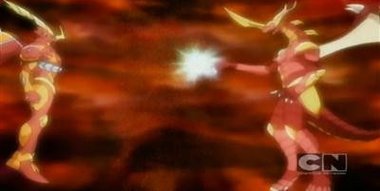