Deep within Gundalia, Sid wakes up from statis and learns that he, Lena, Jesse and Zenet were not actually killed, but imprisoned. Barodius order the attack to commence at dawn while Kazarina continues with her experiments. Sid has managed to escape and notices Ren leaving with some troops. On Neathia, the brawlers stand watch, waiting for the Gundalian forces, which arrives at sunrise. Armed with a Bakugan Mobile Assault Vehicle, Drago quickly tears through the Gundalian forces. Drago is suddenly ambushed by Ren and Linehalt but the two are too evenly matched. Dan begins asking why Ren fights for Barodius to which Ren reveals Barodius gave him freedom. Dan mentions that the emperor put him in darkness and that Ren must have been happy being friends with Marucho, and even though it was a ruse, Dan knows he'd rather be fighting with them rather than against them. Ren shouts at Dan saying that he is Gundalian and he knows nothing, but Dan replies that he is also a Brawler. Dan tries to get Ren to join them, but Ren refuses to forget those who have fallen at his hands (Sid, Lena, Jesse and Zenet). The fight continues but Rubanoid suddenly enters, being commanded by Sid. The two press hard on Dan and Drago but Dan reveals another new Assault Vehicle, one which he can control and Dan easily wins the battle. Sid tells Ren that the others are still alive and Dharak attacks them. Sid knocks Ren out of the way and falls over a cliff, but not before giving Rubanoid to Ren to take care of and telling him to not worry about the others and to "do what he has to do." Dan begs Ren not to go, but he leaves without a word. 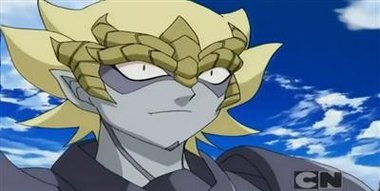