Dan is caught off guard by Jake and is imprisoned in a cell that keeps Drago in ball form. Meanwhile, Fabia and Nurzak engage in battle with Kazarina and Stoica, giving Ren and Mason a chance to break in and rescue Zenet, Lena and Jesse. However, once they reach the lab, they are nowhere to be seen. Kazarina and Stoica press on the attack, causing Fabia and Nurzak to fall down a cliff. However that was part of their plan. Nurzak tells Fabia a story of a man who thrived to fight so much that he led a group of soldiers, including his daughter, into a battle they were unprepared for, resulting in the girl's death. Nurzak laments that Fabia reminds him of her. Suddenly, Kazarina and Stoica discover they have survived and another battle ensues. Meanwhile, Shun and Marucho have snuck into the palace under the guise of guards while Kazarina reveals a surprise: a hypnotized Lena, Jesse and Zenet. Stoica begins flooding the battlefield, forcing Kazarina, Lena, Zenet and Jesse to retreat. Nurzak saves Fabia while he and Sabator are carried away by the water. Nurzak has a vision of his daughter, Floria, and is pleased to know he will be with her soon. After Aranaut is unable to find them, Ren and Mason come across him and Fabia. Kazarina returns to where Dan and Drago are being held and tricks Dan and Drago into looking into her eyes. They fall, unconscious, and are put into a coma. 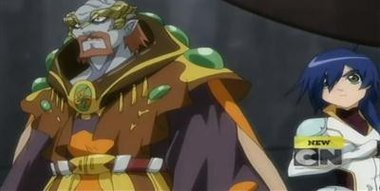